A new narrative 2-day event will take place in Witney, England UK, on the 17th-18th July 2021 (after some COVID-related postponement)!

Players’ armies will be fighting over the Brimstein Heartlands in Aqshy, the place where the Stormcast Eternals dealt the first blow against the forces of Chaos at the very beginning of the Age of Sigmar… and investigate what secrets lie in the ruins of Dinorwig, rumoured to contain a Stormvault.

Plots are forming and players are taking sides in the conflict!

We chatted with the NEOs behind the event, Phil Dodd @Phil_Kazic and Charles Nolan @CharlesKhorne, on what players can expect and what interesting Narrative Play tricks they will be using.

Q: Please summarize the event for us, and what players can expect.

A: The event will be a two day, six game event held in Witney, Oxfordshire in the UK. The games will be of different point vales ranging from 750 as the smallest to a full 2,000 pointer to finish off the weekend; there is an opportunity for a grudge match on Saturday if players feel so inclined.

There is more to the Secrets of Dinorwig event than winning six games. The players will start the event split into two teams, the Liberators (who are the combined forces of Order and Death) and the Resistance (who are Chaos and Destruction,).

The teams are aligned this way at the beginning of the event, but perhaps new factions will develop during the weekend, or players will try to solve the secret on their own.

SOUND ON
The Dinorwig Daily, currently in exile in Vorsprangs Bridge, discovers historic footage from before the fall of Fort Ignis. What is Sigmar trying to hide?#WWOne pic.twitter.com/YLrh8oB9JW

Q: What Narrative innovations and rules will you be deploying in this event? We have heard rumours that players will have to discover clues throughout the event.

A: We have taken elements from some of our favourite narrative events and then added a few twists of our own. The biggest twist is that to win the players need to discover the Secret of Dinorwig. To do this they must answer three questions, what is it, where is it and how does it work.

The first two questions can be answered as players/teams solve clues, riddles and puzzles that they uncover during their games or earn over the weekend.

The answer to the last question, how does it work can only be solved by the collection of Knowledge Points (KP). The team/players with the greatest KP at the end of the sixth game will get the first shot at answering the other questions. If they are incorrect then the next team will have a chance to answer. The first to get it right will have uncovered the Secret of Dinorwig and secured the power that it holds.

When players gain clues, KP or items over the weekend they can choose to share them with their commander and team during the Command Phases between rounds. Perhaps they will choose to keep the information entirely for themselves, this risks alienating their allies and reduces the chance they will be trusted with other key information that could unravel the secret and alone they may not secure sufficient KP to get a shot at solving the puzzle.

Players may also get support from the shadowy figure seen in the general’s invitation video during the weekend.

SOUND ON
Greetings General! tickets are on sale tomorrow (30th September) at 8am for #WWOne Secrets of Dinorwig

Q: You have created an awesome detailed map for the event: will players be able to play on thematic tables representing each location?

A: I’m glad you like the map, we have put a lot of effort into the table design and each of the locations named in red on the region map will be fully recreated on the table top. We have also written table rules for each location trying to represent the character of these places within Aqshy. These add a unique flavour to each game without making the rules to complicated.

Within each location there will be ways to gain KP. This gives players the chance to gain something from every game even if they can’t complete their main objective. You don’t need to win every game to succeed or make a valuable contribution to your faction.

To try to add to the immersion of the event we have written a brief history of each area that players will find themselves fighting over. We hope that players will remember these stories from our twitter account when they come to the event and give them a personal attachment to the region.

If this event is successful we plan further events based in and around this region of Aqshy and will expand the map and corresponding tables accordingly.

Q: You are part of the Narrative Play scene in England, and the storyline of this event involves characters developed during previous Narrative Events, isn’t that right? Tell us more about that.

A: The plan was that the sides would each be led by a commander who would be a player as well as a character. We put the call out to our attendees and fortunately we had two great characters volunteer to lead the charge. This gave us a great opportunity to develop the events story organically.

The main protagonists in this narrative are Lord Dracothfoote (Steve Foote @tinracersteve) and Olrog (Ollie Grimwood @gr1mmas) who were working together at Realms at War 2019. 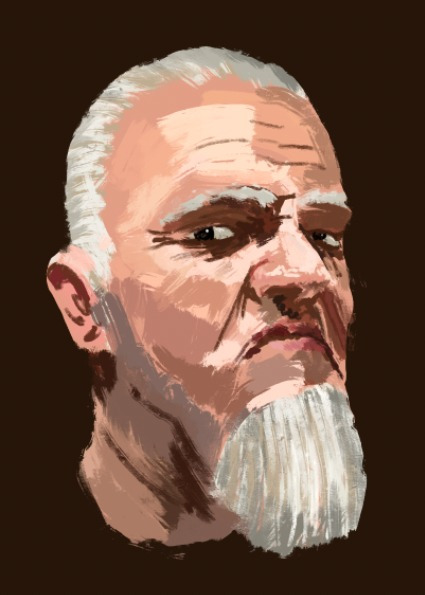 The promise of power hidden in Dinorwig has driven a wedge between Dracothfoote’s winning coalition. The secret and the promise of a good scrap has encouraged Olrog to find new allies amongst the Chaos forces who hold Fort Ignis. They have both rallied their banners and recruited the other players coming for the weekend to one of their sides.

Q: The background details for Secrets of Dinorwig are quite involved and really well done. We have been following them on social media for a number of months, and seen players pitch in with their own backstories and rivalries… as well as the character of mayor Ulf Cywin being drawn into the political developments 😉 . What is this drama, mystery and comedy all about?

A: The story has been bubbling under the surface for a little while. For Christmas 2017 I wrote a narrative campaign for Charles, set around Fort Ignis where his character, Chartrek Beasttamer had to defeat the Stormcast Eternals around Fort Ignis and recover an Axe for Khorgos Khull.

Having created this region we decided to invite a couple of friends to join us and the following year, Charles wrote a campaign where the Stormcast Eternals assisted by the Seraphon (Steve Foote) tried to take back Fort Ignis being held by Chartrek, supported by the Iron Golem Ogres of Ben Foote. Unfortunately we failed and Chartrek opened a portal to the realm of Chaos and passed through it. We then decided to build on this and invite more people to play in our sand box and the idea of an event was born.

The story has developed as a way to let the players know how this situation has occurred and to fill in the history of the area, to help them immerse themselves in the game and the event. The feedback has been terrific and the development of player’s backstories is great to see.

One of the latest player stories is a collaboration written by Daniel Summerbell @HobbySummerbell (of Erynost fame) featuring the forces of “Jimbo” Warth @jimbo9jimbo (of the RAW NEOs and the ‘Mitzy & Jimbo Show’ fame)!

Phil created Mayor Ulf Cywin largely as an opportunity for a bit of fun and to promote the only part of our map that is still civilised and not ravaged by Chaos. He is a key player on this regional level but is much more interested in protecting Vorsprangs Bridge (and himself) than the unfounded rumours circulating about Dinorwig.

SOUND ON
Greetings General! tickets are on sale tomorrow (30th September) at 8am for #WWOne Secrets of Dinorwig

Q: What would you like to say to players out there to motivate them to come to WWOne, or join you in future UK Narrative Events?

A: WWOne is all sold out but keep an eye on your reserve emails because we have created a few new tables to accommodate additional players. For everyone else check out our Twitter account where we have posted all the lore and videos. If you like what you see join in with us @WarhammerWitney, give us a follow and stay up to date with all the fun. We will be posting updates during the event and some follow up afterwards as well.

We’d love to see your stories and how your armies are manoeuvering around our region of Aqshy so feel free to share it with us in the run up to the event.

This sounds like an awesome addition to the UK narrative scene!

You can also hear their interview by the EATBATS of Sigmar gaming club’s podcast!

Any interested players out there, sign up for that waitlist because you might still get a spot and play with a great crowd of narrative players!

This article is brought to you by the Narrative Event Organizer Network.