So over the last weekend, Kendal (UK) played host to latest in the series of A Gathering of Might (AGOM) Warhammer events.   Adam Turner (@WORGORE) always puts on a great event and it looked like another success this year based on the Twitter coverage.  In this post, I’ll cover the pack, results and the top Age of Sigmar lists.

Check out the AGOM website and events Facebook page for all the details of future events if you are keen to attend.

AGOM XXI was played over 5 games using the General’s Handbook 2017 scenarios (rolled before each round).  There are a few house rules of interest, including the use of some specialist terrain warscrolls, setting the timing for when mysterious terrain needs to be rolled for in the hero phase,  and magic automatically failing to cast on a natural double 1 (regardless of modifiers).  The scoring system was a straight 2 points for a win, 1 point for a draw and 0 for a loss, with no distinction between major and minor results.  You can check out the full pack. For more coverage of Graham’s beautiful army, check out his showcase on the Warhammer Community site!

Here are pictures of the other nominated armies for Best Painted. 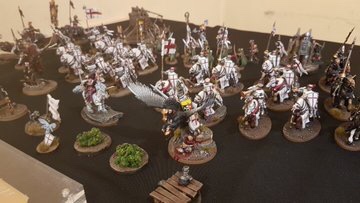 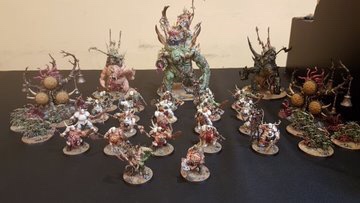 As always, people are interested in the top Age of SIgmar lists.  Now this is probably one of the last significant two day events before Age of Sigmar Second Edition (with the exceptions of Nashcon, Bugeater and Badgacon) so we can expect things to shake up soon.