Hey everyone, a new week and a new club profile highlighting an Age of Sigmar Gaming Club from around the world.  Today we have South London Legion (@sthlondonlegion), home club of the recent AoS Grand Tournament winner, Ben Savva.  The aim is to introduce the gaming clubs, explain their history, anecdotes, iconography and current and former players.  You’ll find details of how to contact the club and follow along with their successes on social media.  Today’s post was kindly written by club member, Nico. 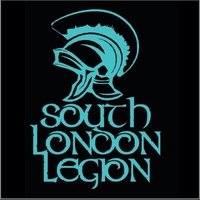 For more club profiles, check out the clubs section of the site.  And, finally, as always, check out Dark Fantastic Mills for great 3D printed terrain perfect for wargaming.  Its super versatile and light so worldwide shipping is inexpensive.  Use the “aos shorts” discount code for a further 10% off the already decent prices.

Typically we have about 12-16 players on a Wednesday weekly playing various games. Our WhatsApp groups are the beating heart of the club, with near continual list building, hobby and banter.

Gaming at the South London Legion

Members typically play one one or two 2,000 point games in an evening or one large game and then a smaller game like Kill Team or Necromunda.

If you have a smaller force, then someone should be happy to give you an introductory or demo game as well.

There’s a competitive edge to some of the members of the club – we’re often practising for tournaments. Some members like Ben “Best Dressed” Savva and Rob “Gamey Pete” Bradley have done well at recent events and we regularly get decent numbers to large events around the country.

There’s also a more narrative side to the club, particularly on the 40K side and with Ben “Four Flappies” Raven and his refusal to take named characters.

We’ve run a successful 9 round Bloodbowl league and are looking to do the same with Necromunda and 40K/Kill Team.

We’ve recently upgraded our venue to the bar area of a hotel, which offers ample gaming space and storage. Most importantly…

It has a bar🍻It’s a bright room with a big fan in the summer! You can now find us at the Lansdowne Hotel in Croydon.

The new venue is between East Croydon and West Croydon Stations. You can get regular trains from London Victoria or London Bridge to East Croydon in only 15 minutes. The Legion are a large club with strong social media presence – the guys and gals are all over Twitter and Facebook.  Feel free to reach out to them through either of those media.