Today I have another great Army Showcase to share: Veillotron’s award-winning Stormcast.  Veillotron’s Stormshadow Crusaders are an excellent example of seamless conversions matched with a strong theme and great painting.  The more you look at the models, the more you notice and appreciate the force.  It has such a great overall tabletop effect too.

For more great Age of Sigmar armies, check out the other showcase posts.  And remember that the site is now partnered with Dark Fantastic Mills, producers and purveyors of amazing 3D printed terrain and you can use the code “aos shorts” to get 10% off.  The terrain is super light so shipping worldwide is surprisingly cheap.  With that said, I’ll hand over to Veillotron to talk a little about his army.

I got into Age of Sigmar two years ago. I had painted models between the ages of 10 and 15 but had not picked up a brush in 25 years. Spurred by my son who wanted to play the game, I decided to take on the challenge of painting a full army, something I had never done before.

I’ve always loved knights and mostly painted Bretonnian models when I was younger. As there are no chivalric factions in Age of Sigmar, Stormcast were the next logical choice; I also really liked their aesthetics.

The most important goal when designing my army was to make it as unique as possible, to make it my own. That meant coming up with a differentiated i) theme; ii) color scheme; and iii) conversions, which I had never done before.

2 Boards, 1 Story: little video of the finished product… The execution on the water could have better, but overall quite happy with the end result. My son’s board got Bronze overall (as per previous tweet), and I managed to get Gold at AoP! Apologies for the wobbly camera..😎 pic.twitter.com/GaVFCfsqUS

Developing a Theme for the Stormshadow Crusaders

I wanted my army to have a battle-worn, realistic and gritty appearance. I wanted my warriors to look like they had gone through – and survived – hundreds of battles. I also wanted my Stormcasts to be menacing and dark, whilst remaining noble.

The Stormshadow Crusaders is a Stormhost formed exclusively of ex-Chaos worshipers (mostly adepts of Tzeentch) which have been ‘converted’ by Ghal Maraz. Continuously haunted by their past crimes, they are on a never-ending quest for redemption.

One of the reasons I love the battle-worn/weathered look so much is all the added details and textures which can be added to armour, boots and clothing.  I was inspired by many photos on Putty & Paint.

Converting models is the best way to make your army feel more unique. Since I had never done any conversion work before, I thought that doing simple headswaps would be the easiest way to learn about that part of the hobby.

I was also keen to give my Stormcast a more medieval and practical feel. Games Workshop has a tendency of making huge helms for leaders, and I wanted my heroes to look like they dressed for a battle, not a parade.

It took me a while – longer than I had originally though – to find Games Workshop helms that fitted the style that I was looking for [Editor: converters often look for official Games Workshop parts so that they can take part in events at Warhammer World]. The more recent Bretonnian sculpts all had those heraldic decorations which didn’t fit the theme of my army. I really liked the sculpts from the late 80s/early 90s, but given cost and availability, it didn’t make sense. In the end, I found a lot of the helms I am using through the ForgeWorld website. I was pleasantly surprised at how much of an impact a headswap can have on the overall appearance of a model.

My initial goal was to make the army as monochromatic as possible. I knew from the start that I wanted my army’s two main colours to be silver and white. But I wanted those two colors to be much darker in shade, to reflect my Stormcasts’s darker side

The only other color I was initially intending to use was brown – for belts, scabbards, boots, etc.
I quickly came to the realisation that those colors were too bland. I then decided to add to the palette a purplish maroon (similar to the Stormcast’s standard hilt color) and some gold, which worked well as a spot color, really bringing some life into the models.

Monsters and mounts are a good way to introduce another color into your army without disrupting the overall theme. With the idea of keeping the look of my army as monochromatic as possible, I painted my dracoths in the same purplish maroon I used for the weapon hilts and the primes’ manes. Unfortunately, that didn’t work out as I had hoped, the whole army looked a bit too dark and bland.

So I decided to try a new color scheme for my gryph-chargers, something lighter. And that’s when I decided to go for the grey-blue/white scheme, with some thunderhawk blue to add a bit more life.  I was really happy with the results on the test model and decided to paint all mounts and monsters in that color scheme.

As the centerpiece of my army I wanted to build an Aetherdrake: a more nimble, fast-moving and wingless Stardrake (wingless was much more for practical reasons than an aesthetic choice: I wanted to be able to travel to the UK without the model breaking apart).

I found that, when tilted, the Carnosaur pose seems even more dynamic, as if he’s running at full speed. That is why I decided to use that model as the starting base for my Aetherdrake.

This was by far my biggest conversion work, although it was mostly kit-bashing and required very little green-stuffing.  I had a lot of fun kit-bashing this hero. I used bits from the Carnosaur, Stardrake, Archaon, Lord-Aquilor, Vanguard-Palladors, Celestant-Prime, Gavriel Sureheart, Sequitors, Liberators and Ruins of Osgiliath kits.  The helm is from ForgeWorld’s Infernal Guards Fireglaives. Oh, and a few Bonesplitters arrows! For practical reasons, I decided to do the Prime without his wings. I also wasn’t too keen on the shape of the Prime’s wings, they reminded me a bit too much of traditional religious paintings. It also made him look a bit less angelic and slightly more menacing. Now that my army has been magnetized and easily fits into my case, I have been thinking of adding a pair of wings. If I do, I will be using the wings of the Knight-Azyros. This is actually my favourite model, despite it not my best paint job (I’ve done a better job painting the gryph-charger fur of most of my Palladors…). He is also my only named model, I need to come up with names for all my other dudes…

I really love the model because of i) that helmet, my all-time favorite sculpt (comes from a knight model I bought in the late 80s); ii) I love the regal pose of the gryph-charger; and iii) I love the skull chalice he’s holding in his left hand – that is a nod to both his background lore and to my personal Grail, the Warhammer World Grand Tournament trophy which I will never win… 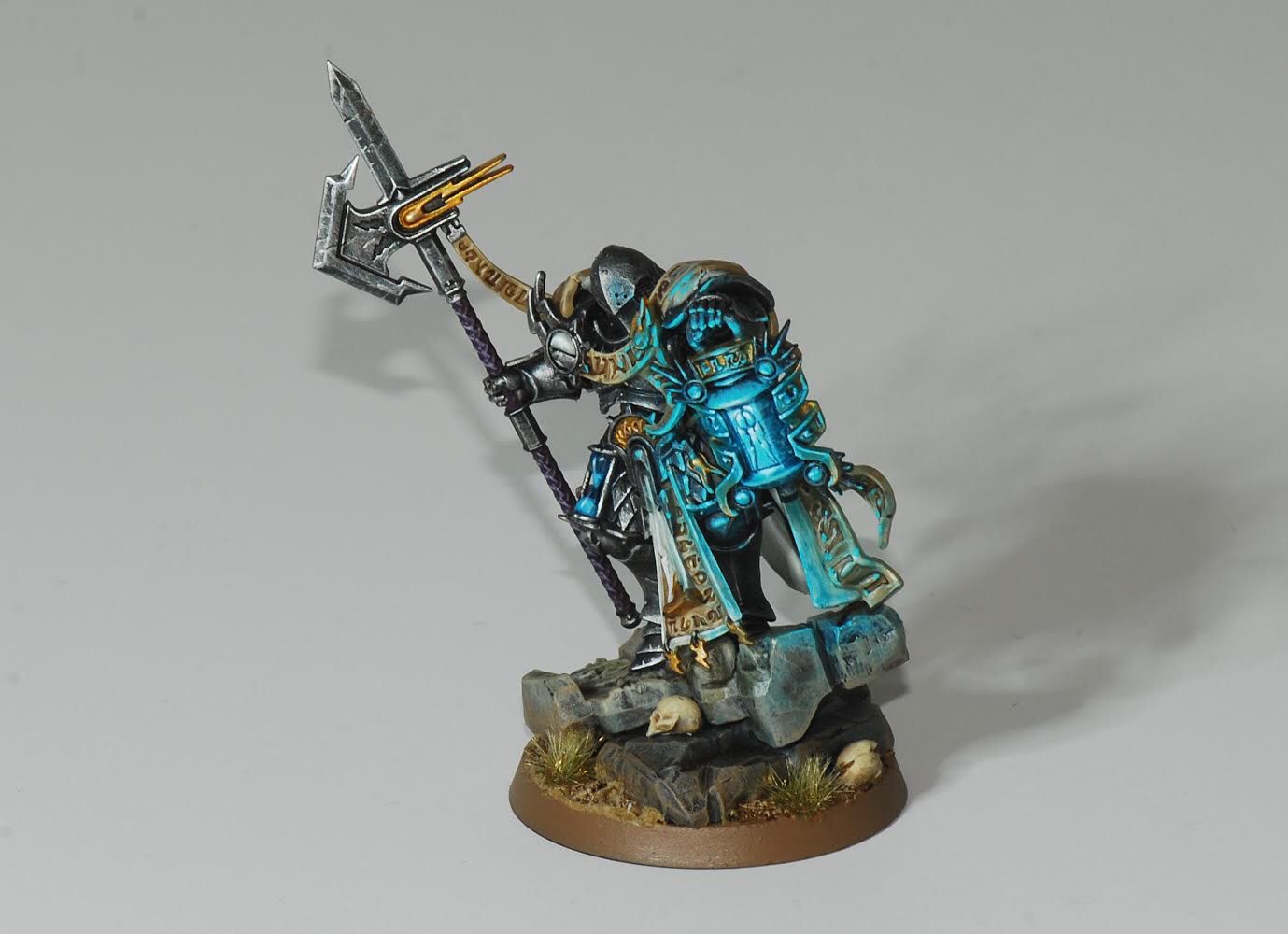 This was my first attempt at OSL. Might have gone a bit too heavy on the blue highlights, but it was a fun experience. The helm is from ForgeWorld’s Infernal Guard Standard Bearer. This is the latest hero that I’ve painted. It is still a work in progress, as I need to tidy-up some elements, work further on the magical blue items, and scratches on the pauldrons, amongst others. But this level was good enough for me to put him on my Armies on Parade board.

The head is used is from a Warhammer 40,000 Wrack; initially it looked too small compared to the body; by adding a Liberator ‘steel halo’, the proportions work better. The Vanguard-Palladors are in my humble view some of Games Workshop’s best models, I just love their dynamic poses.

I tried to paint the gryph-charger’s fur to look like the one of a panther, which was a lot of fun. I do find that painting texture on larger areas does help make it more interesting.

The helms are from the Freeguild Greatswords kit and the Demigryph knights.

This is the first unit of my army which I painted.  I initially painted them with the Stormcast facemasks, as I had not been able to find a proper helm for them. I recently opted for the helms of the 30k World Eaters kit from ForgeWorld. 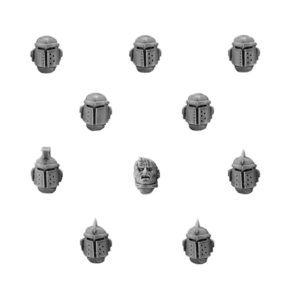 To match the look of my Stardrake I also added a few arrows to the unit – some hitting shields and a few hitting their targets.

What’s Next for Veillotron’s Stormcast?

I doubt that anybody was as excited as I was about the release of the Sacrosanct chamber. I had been dreaming about Stormcast in robes for the last 2 years. I tried – and failed – to convert many Ahriman and Dark Angels models into Stormcast models; with his chalice and spell book, my Lord-Aquilor was somewhat of a Lord-Arcanum before the models were released. So now that those Sacrosanct models are out, I have a lot of units to add to my army – as many, if not more, than the current number of models I currently have. And so I probably have another 12-18 months of painting before I can say that I’m happy with my Stormcast army.

But I might take a small break and paint something for a change. My pile of grey plastic has grown much faster than the number of painted models, and I have enough to build 4 additional armies. I want to paint a Chaos army based in some frozen land, but I think that I’ll start with a destruction army, led by the lovely Troll Hag.