Today I have another great army showcase to share with you:  Adam Cunis‘ Living City army.  Full of amazing conversions – from dragons, to griffons, to a unique Treelord Ancient.  It is definitely worth checking out Adam’s award-winning army.  Adam was also kind enough to share his thoughts on how the army came together and developed over time.  Thanks Adam!

For more great Age of Sigmar armies, check out the other showcase posts.  And remember that the site is now partnered with Dark Fantastic Mills, producers and purveyors of amazing 3D printed terrain and you can use the code “aos shorts” to get 10% off.  The terrain is super light so shipping worldwide is surprisingly cheap.  With that said, I’ll hand over to Oscar to talk a little about his army.

For the love of dragons

I’d got to a point this year of disenchantment with Order Draconis, not because they aren’t awesome, but mostly because I’m not as awesome at playing AoS as the list could be. I was rereading Firestorm, looking for inspiration, and somewhere else to stick a bunch of dragons for more fun games down at Magic Madhouse (Angel Wargamers’ de facto headquarters these days).

After AoS2 dropped I played a lot of competitive games in a short space of time and burned out.

I’ve only comparatively recently become a matched gamer. Having been painting toys based on what I think is cool for 22 years (never did the break thing that you hear about anecdotally whilst people become students etc) and playing at tournaments since only 2013 (a couple of 40k events followed in 2014 by SCGT!).

A couple years back, I built my pride and joy – a Glade Lord on Forest Dragon.  The aim was to run him as an ally for my Order Draconis. 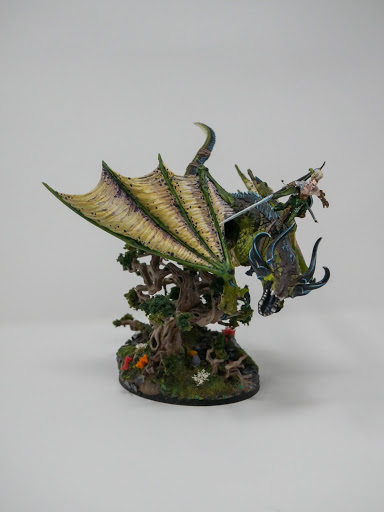 He was 400 points, Wanderers were in the allies matrix and this was before the existence of the Doppelganger Cloak which has a similar effect to the soporific breath However, the Wanderer keyword vanished when the warscrolls were updated. So, for a while Skarloc Swiftstride, Dragonrider (my old Realms at War wardancer narrative conversion) became a Dragonlord for Order Draconis instead… and it was glorious.

But dragons aren’t my only love in AoS.

When the world exploded and all our bases lost their corners I was painting twigs I’d found in the garden to look like fallen boughs of Wildwood trees… and sullen, green clad Wood Elves to stand on them. In fact the first models I painted for Age of Sigmar were wanderers. And under Mo Comp I did quite well with them. But then, as with all good things, the time of the Waywatchers came to pass and only the Lord option remained. Gone were my 3 man machine gun, 80 point battleline units. The rise of Sylvaneth

Then came the Sylvaneth. I’d always run a few Dryads, a Branchwraith, three Treekin and a Treelord with my wanderers. But the battletome was my best bet at an army that felt like the play style of 8th Edition old world wood elves.

I had some limited success with the list and converted all my Kurnoth Hunters to match my Tree Revenants. I wanted elf spirits emerging from trees across the army. All of which, unbeknownst to me, was leading me down the shadowy paths of Ghyran to the Jade Kingdom of Thyria and the city of the Everqueen herself, the first of the seeds of hope: The Living City. The initial thought behind building a Living City army from the Firestorm Allegiance was to include a Treelord Ancient, Glade Lord on Forest Dragon (Stardrake) and Orion (Celestant Prime) as Triumvirate leaders of an alliance of the peoples of Order. The Treelord Ancient was built using finecast Belakor’s torso and a head from Inquisitor Scale Kal Jerico (he came with three). The staff top is an actual pine cone and the basis for the rest of the model is metal Treebeard from LotR and some actual pieces of wood!

As I played with lists I moved away from the Stardrake – he’s so expensive points wise, everything I wrote was very alpha strike/ combat orientated. Which is fine. But is exactly what I’d been playing already with Order Draconis.

A new direction – refugees and prospectors

So I thought what do I really want from the army, I thought about human refugees and prospectors, working alongside the aelves of Ghryan, I thought about having fewer Sylvaneth in the army itself as they would be within the forest, so the Branchwraith and summonable Dryads came in. The Treelord ancient had to stay to put forests on the table for my ambush tactics and that just didn’t feel like a Stardrake or Prime build anymore.

I realised that I wanted to recreate that almost-but-not-quite synergy I’d had thematically with my Wanderers and Sylvaneth back at the beginning of AoS.

So battleline was to be filled out with ragtag human survivors, and thirty glade guard.

I realised that if I deploy off the table with the archers and ambush with them then I do not have the opportunity to use the Nomad Prince’s reroll 1s to hit command ability reliably (activated in the hero phase) so in came a Sylvaneth Knight Azyros. I looked at the Free Peoples range and remembered about the General on Griffon, one of my all time favourite models, except for the static pose necessary for old monster base squares…

A narrative started to form in my head of the Lady Alarielle herself saving the life of Godric, Freeguild General, of no given land, a nomad, questing knight. He swore allegiance to the goddess of life and by extension swore to protect her city and the hope it represented to the forces of Order.

I wanted him to be a centrepiece towering above the footslogging aelves and men (at this point I have no dispossessed Duardin in the army, although a mining cart might be entertaining) so I took a hobby knife and clippers to the Griffon and its rider. And then he got some paint, Andy Burton and I have been challenging each other to level up our painting recently and he reckoned that Purple, Green and Yellow would work well, but It’d be hard work. So I took on the challenge.

You’ll notice in the previous image that Godric has both his arms intact. Just before priming him I had a brainwave, if Lady Alarielle had blessed him with new life, something ought to show, out came the clippers, on came a Tree Revenant arm instead, blessings of the lady indeed! His head, for those interested is from the Van Saar warband in Necromunda and the Living City symbol on the Griffon’s chest armour is carefully cut from printer paper (I drew it with Green pen, its not green stuff it’s just what was lying around…) and affixed with PVA glue then sealed with ‘Ardcoat. The rest of the army came together pretty easily at this point from my existing collection of Wood Elves and Sylvaneth until… club mate Alex decided he was running Sylvaneth in 2019 at the two team events we’re signed up for so… I can’t have Kurnoth Hunters in my list. I racked my brains (and Andy’s and Matt Hinton’s on a long drive to London from York) and replaced them with Demigryph Knights, a much underused unit.

But the models are a bit gormless… back in 2014 I had a Demonic mount battle standard bearer in 8th edition for my Chaos army, he was riding a big old lion: I thought I’d do the same conversion but for a whole unit! The rest of the list shaped up like this for Angelcore which was a 2k tournament at Magic Madhouse London 6-7th October 2018.  You can check out coverage including streamed games here.

So there we have it, a bit long, a bit rambling, but that’s how my Living City army came to fruition this summer. I’ve really enjoyed playing something a bit more dynamic and active than throwing three dragons at people. I’m already planning an Alarielle conversion and writing lists that include elements from this one with more Sylvaneth too!