Today is the last Age of Sigmar matched play tournament round-up that I will be doing for first edition.  Yes, ‘Ardfists (Melbourne, Australia) and Flying Monkey Con (Wichita, US) are still to come, but I don’t realistically see myself having the time to cover them as well as all the Second Edition news that is hitting.  So today is the last time I’ll be covering Age of Sigmar lists for first edition.  Below, you’ll find the top Age of Sigmar lists, results and pictures (to the extent that I have them) for:

All four events were held over the weekend of 9 / 10 June 2018.  Given the number of events, and that we have a new edition around the corner, I have not covered the events in my usual detail, but I still wanted to have a record of them for posterity.

For more Age of Sigmar tournament lists and coverage, check out my archive, and the events coverage posts.

Heat 3 saw a new range of armies around the top tables, as well as several old favourites as players took armies out for a spin for the last time.

The pack is here.

As always, the standard of army painting was high at Warhammer World and you can check out my army showcases of Tim’s Daughters of Khaine and Brad’s crazy Skaven for more great pictures.

If you are a subscriber to the Warhammer Twitch channel, you can also check out the videos of the games.

The Sydney Slaughter is hosted by Chris Welfare of the Mortally Wounded podcast.  Chris is a great bloke and top tier gamer.  You can find the event’s page here.

The pack has a number of cool custom scenarios which are worth checking out.

The lists (here) were reviewed over on the Heralds of War podcast. 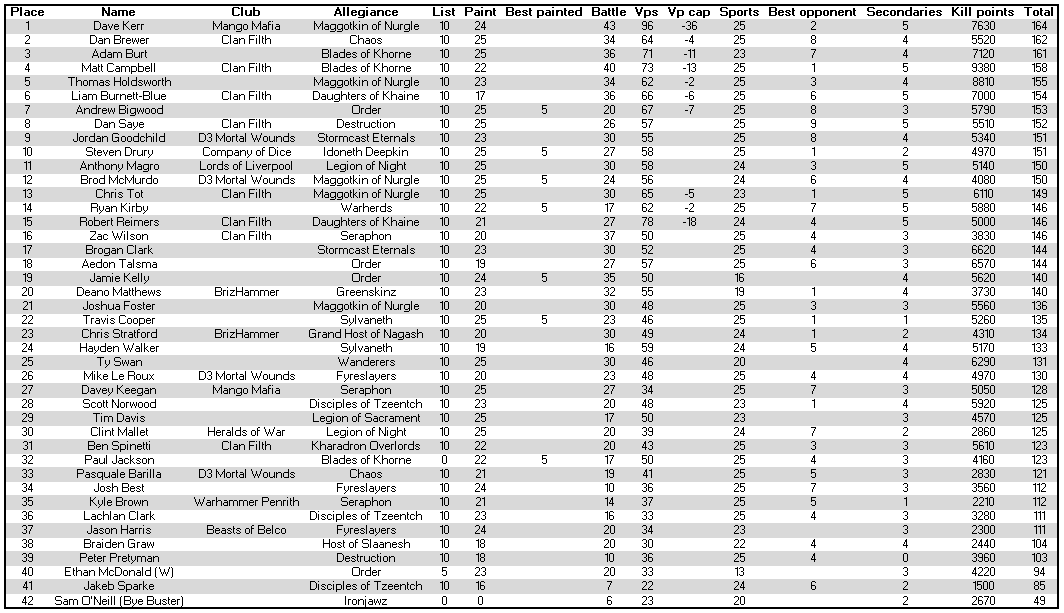 Badgacon looked like a mental event run in the Aussie bush by those great lads at the Measured Gaming club – seriously these guys have an enthusiastic Twitter presence.  Here is a pic of the guys from their trip to Cancon (currently the second biggest Age of Sigmar event in the world in 2018). The event details can be found on Facebook and the pack is here.

The lists (here) were reviewed over on the Doom and Darkness YouTube channel. Sam Morgan, wisened square base expert, now round base convert and Khainite devotee took first place with Daughters of Khaine. Hosted in New Jersey, with Martin Orlando as TO for the Age of Sigmar event, this was another medium sized US event.  The event was streamed over the weekend on Twitch here.