Hey there, work is super busy at the moment, but I still wanted to put out a short show covering all that we know about Malign Portents so far and the great news out of the Studio Preview at the Las Vegas Open, Daughters of Khaine and more!

Between recording and releasing the show, Warhammer Community put up a new article on the pre-releases for Malign Portents and Legion of Nagash.  All the information and pictures are covered in an addendum to the show.

This show also reflects where I want to see the AoS Shorts website growing over 2018.  The podcast will remain focused on succinct tactics and strategy advice for Warhammer: Age of Sigmar.  But the website is expanding into the Age of Sigmar background and hobby.  Over the year, you’ll find coverage of all the major events – Malign Portents, Legions of Nagash, Daughters of Khaine – and summaries of all you need to know about the Mortal Realms – the people, the places, the cities and the agriculture (expect a crop rotation chart).  So keep checking out the website as it grows over the year.

A couple of final notes before we delve into the show:

Malign Portents has recently been announced by Games Workshop as the major focus for Warhammer Age of Sigmar through 2018.  From what we know so far, Malign Portents is a book, global campaign and so much more.  It is an advancement of the Age of Sigmar lore and an introduction to the Realm of Death, Shyish.  We can expect a number of model and book releases, presumably for each of the Grand Alliances.  At the moment, Malign Portents looks like a fantastic re-launch of Age of Sigmar.

Malign Portents is a season of new developments to “deepen” and expand Warhammer: Age of Sigmar.  The storyline will run through battletomes and publications this year.

Already, Games Workshop have released a series of Warhammer TV videos, Warhammer Live interviews and a series of free and downloadable stories from the background team over at the Malign Portents website.  These stories have focused on the battle between Nurgle and Death to start but have given an interesting insight into the lives of normal people in Shyish.

The Malign Portents website also has a timeline and overview of the Mortal Realms if you are new to Warhammer Age of Sigmar.

Shyish, the Realm of Death

The story arc is set in Shyish, the Realm of Death.  From the start it is important to realise that the Realm of Death does not mean that it is the Realm of Undeath, such as we associate with Nagash.  There is such a thing as neutral and good death.  Think civilisations that can communicate and interract with their ancestors.  Shyish contains hundreds and thousands of underworlds (or afterlifes) for the Mortal Realms.  These are slowly being taken over by Nagash.

Nagash is still, shall we say, a little peeved at Sigmar denying him the souls of the dead through the reforging process of the Stormcast Eternals.  However, Nagash has a plan and has been studying that reforging process.

Also, Nagash has been expanding his influence in Shyish and is distorting the normal balance of the realm.  He has commanded Arkhan to collect all the Realmstone in Shyish (think black sand) in order to build massive citadels and monuments, not least of which is a colossal inverted black pyramid of vitrified realmstone.  Now realmstone is powerful stuff.  It can impact the lifespan of those around it – it can sap your energy and decay you, or prolong you.

As a by-product of Nagash’s plans inhabitants of the Mortal Realms are experiencing weird visions, omens, prophecies and dreams of disaster with the occasional glimmers of hope – something nasty is coming. The Malign Portents book will cover this story of the gathering maelstrom in the Realm of Death, and includes new Time of War rules for fighting in Shyish, from life-sapping wastes of Shyish to interpreting fell omens to aid your army.  These have been referred to as “prophecy points”.  The book will cover both narrative and matched play. The Characters – the Harbingers

Malign Portents introduces four new heroes to Age of Sigmar, one for each Grand Alliance.

Now while these characters are named – they are one of hundreds in their roles, so their warscrolls are for generic heroes.  The warscrolls have been leaked, but I’m not going to cover them here in isolation. The Campaign runs for 6 weeks from 15 February, in three fortnightly chapters.  These will tie into the painting competition that we know about.

Finally, I’m keeping all the Malign Portents information in one place (because its a bit scattered over Games Workshop’s various platforms).

There is more Malign Portents swag coming too!

Battletome: Legions of Nagash will revitalise (joke intended) the Death grand alliance.  And it looks like we can expect the book to arrive in February. 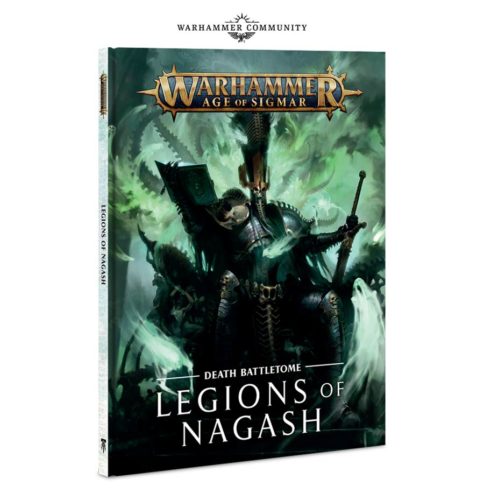 The book contains all the warscrolls for every Death model “(so far…)” and the rules for six allegiances (including four new ones): Each of the new legions corresponds to a Mortarch (or Nagash himself), and each allegiance, while using a mixed pool of Death units, will feature its own unique in-game mechanics and abilities.

Now a large number of the warscrolls have leaked due to an early update of the Australian Age of Sigmar app.  I won’t be covering them here because I don’t believe there is much point in isolation from the allegiance abilities and points costs.  I’d rather cover everything in one show at the time of release.  However, the new scrolls do demonstrate changes to faction keywords, command abilities, summoning and ethereal.  So the book promises a big shake-up (which we all know Death needs).  So you don’t get too worried, a few locals have commented that the changes look like they are returning the Death factions closer to their roots in the Warhammer background.

Now you have to have been living under a rock not to have seen the epic release videos and pictures for Daughters of Khaine that surrounded the Las Vegas Open this weekend.  If you haven’t you seriously need to check them out here.

Morathi, one of the coolest characters from the World that Was, is back and the Daughters of Khaine are getting a battletome.  Morathi, the Shadow Queen, and outspoken representative of Khaine, the Bloody-Handed Aelven god of Murder,  has returned for revenge but she is no longer quite what she was – having been held captive by Slaanesh. I highly recommend you check out Warhammer Weekly’s breakdown of the reveal, but the high points are:

Looking forward, the Las Vegas Open Studio Preview confirmed that a second Aelf faction is coming.   We’ve had a bit of chat on Twitter as to whether this is a link to the Aelfs, Collegiate Arcane or something else.  In any event it is a great piece of art.

From my personal perspective, and with no inside knowledge, I suspect we will get a Moonclan battletome this year too.  Moonclan were not in General’s Handbook 2017, they have a champion in the Malign Portents narrative and their models are showing up in White Dwarf battle scenes.

Finally, we know that one of the most beloved Warhammer terrain pieces, the Skullvane Manse, is coming back into production.  We may even see more Age of Sigmar terrain this year (if you look closely at the Daughters of Khaine videos).

Thanks for listening – get in touch and let me know what you think.   The easiest way is to find my on Twitter.