Hey all, this weekend is the first large Warhammer Age of Sigmar singles tournament using the Second Edition rules – the Midwest Meltdown.  Hosted by Domus in East Peoria, Illinois, almost 60 players will battle it out in a 2,000 point matched play event.  In this post, I’ll cover the pack, the army lists and some stats.

Follow along over the weekend on Twitter by keeping an eye on Domus’ Twitter account and using #midwestmeltdown.  For more Age of Sigmar Second Edition event news, check out my event coverage, AoS 2 events packs page, the Age of Sigmar event calendar and the tournament list archive.

So let’s talk about the tournament pack.  In this new edition, but pre-FAQ world, tournament organisers have a hard job making an accessible pack that uses the new rules, while avoiding the rare negative play experience which can sometimes arise from something which may have slipped through play-testing.  Now, its only a problem for a short window because Games Workshop now tidy up any stray points quickly, but if your event is in the interim you need to make arrangements.

The Midwest Meltdown 2018 is 5 games of 2,000 points matched play using Age of Sigmar Second Edition, the General’s Handbook 2018 and Malign Sorcery.  You can nominate that your army is from a specific realm and use the artefacts.  Firestorm allegiances are also in play.

The Realms of Battle rules will be in use with a house rule to Ghur below. The realm will be set by the tournament organiser each round for all players as well as the Realmscape Feature.  Additionally, the Spells of the Realms will be in play for that realm per Malign Sorcery.  Realms may be duplicated.  Ghur – will not be using the Monstrous Beasts rule.

For gaming, the Midwest Meltdown uses a 12.9.6.3.0 system with secondary objectives announced on the day worth an extra 3 pts a game (i.e. the difference between a minor and a major result).

Finally, the event has a number of house rules for clarity and to address a couple of issues that have arisen pre-FAQ.  Its worth reading the full pack to check these out.  View the full pack here.

Domus has arranged some awesome trophies, along with swag from popular US Warhammer retailer, Ministomp (@ministomp).  There are awards for:

Domus has also done a great job in the lead-up to the event teasing lots of great statistics for the event.  I’ve reproduced the stats here, otherwise you can jump straight to the lists. 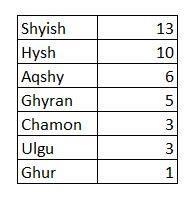 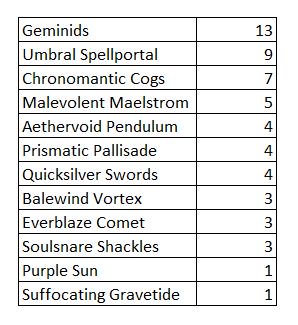 Check out the full lists here, if you missed them along the way 😉

Twitter has been awash with people putting together great looking armies and display boards (always a feature of the US Age of Sigmar scene) for the event.  I’ve just grabbed a few pics below (I’ll come back and add Twitter handles etc).