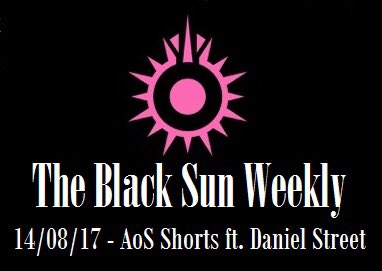 In a break to the regular programming, I spoke with Chris on The Black Sun Weekly about:

The episode, and all Chris’ other excellent Age of Sigmar episodes, can be found here: http://www.theblacksun.co.uk (just note some content filters will block it unnecessarily).

Preparing for an Age of Sigmar tournament

The episode covers a number of points I’ve canvassed in my episodes on list design, preparing for a tournament, and making better in-game decisions which you can find here:

In relation to AoS Shorts, I explain my thinking behind the project – basically an attempt to address my own need to have distilled content on competitive Age of Sigmar in order to prepare for tournaments with limited time.  Due to work and family, I don’t have the time for hundreds of practice games in order to learn my army, the scenarios and the rules for potential armies I may face.   I also don’t have the sheer mental capacity to remember all the rules and possible permutations I might face on the battlefield.

So instead, I have to use the time I have to prepare wisely by focusing on the underlying principles of the game.  This approach means that if I face something unexpected I still know how my army works and how to win the game.  I like to go into games with my cheat sheet and a few key points on how I am going to approach the game and get the desired result.

Once we have GHB2017, I’ll be expanding the show into instructional videos and a “Scouting Report” series on strong competitive army lists.  The aim is to break down for you (1) what the list is (2) how it works on the table and (3) how you can beat it with both list design and play on the table.

Finally, I talk to Chris about the growing New Zealand Age of Sigmar scene.  The fantasy war-gaming scene in New Zealand split hard with the death of the Old World with players going to Ninth Age, Kings of War and other game systems.  This cataclysm was especially devastating given that we are a large country with a small population.  So it is hard to achieve a critical mass necessary to run clubs and hold attractive tournaments, without a strong travelling contingent either by plane or bus.

If you are interested in the New Zealand scene, or seeing all the great hobby that does go down here, you can check out:

Thanks for listening and get in touch if you have any questions, comments or feedback.